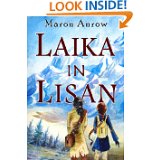 First : Immediate and Full Disclosure: I worked with Maron Anrow, this book’s author, editing Laika in Lisan. It’s because I liked the book so much that I’m posting it on my blog as a publicity shot. This is something I’ve never done with a book I’ve worked on: that’s how much I liked it.

Laika in Lisan is classified as “fantasy,” a genre I previously thought meant dungeons and dragons or monsters shooting one another with laser beams up in the sky—but this novel could have taken place in our world, in a repressive country like North Korea; in fact, Lisan is very much like that country, with its citizens forced to worship their leader; all resources diverted to the military and those in power while the workers starve; and extreme isolation from other nations.

My favorite part is the relationship between Laika and Rodya, an anti-government radical she meets in the woods after her journey into the capitol, where she’s been invited as a visiting scholar, is waylaid by violence. Their interactions, dialog, and progression of their relationship are unlike any other I’ve read, and it provides a welcome relief from the intensity of everything else that occurs. That’s not to say I didn’t enjoy everything else; this book is replete with the kind of suspense that had me sitting on the edge of my chair the first time I read it, furiously clicking through my Kindle to see what happens next: in other words, it’s a real page turner—or screen clicker.

And now for a moment on my soapbox: Laika in Lisan is one of thousands? millions? of books that are part of the independent publishing movement, growing bigger every day. Some of these books are so crappy they make this movement look lousy, but I’ve found just as many genuinely good books as bad ones in the mix. This movement has the potential to remove the mega-sized publishing corporations as gatekeepers of what reaches the reading public, and to put writers in control of our work. For this to happen, however, indie authors must put as much careful precision into their final products as they would if they were working for a publisher who’s paid them an advance and given them a contract. Laika in Lisan is one book, believe me, that’s gotten that kind of precise authorial attention. Climbing off soapbox.

Click over to Amazon and check it out; the book is now available for the Kindle; in a few weeks the print version will be ready. And it’s already garnered two
Maron Anrow
reviews, both of them positive!

Oops…I almost forgot to mention that Laika in Lisan is Anrow’s first novel, a fact I include because you’d never guess it’s by someone without more experience. I’m proud to have been a part of this literary endeavor.